(2001, DCP, 92m, Palestine/France, Arabic and Hebrew with English subtitles) dir Elia Suleiman. Narrative feature. In Nazareth, under a guise of banal normalcy, the town embraces folly. Under pressure from his failing business, a man takes matters into his own hands and tries to break a chain reaction of petty feuds. He breaks down himself. The man is ES’ father. A love story takes place between a Palestinian man living in Jerusalem and a Palestinian woman from Ramallah. The man – ES – shifts between his ailing father and his love life, trying to keep both alive. Because of the political situation, the woman’s freedom of movement ends at the Israeli army checkpoint between the two cities. Barred from crossing, the lovers’ intimate encounters take place on a deserted lot right beside the checkpoint. The lovers are unable to exempt reality from occupation. They are unable to preserve their intimacy in the face of a siege. A complicity of solemn desire begins to generate violent repercussions and against the odds, their angry hearts counter-attack with spasms of spectacular fantasy. 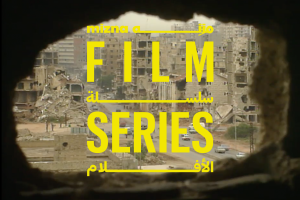